Aberystwyth University (AU) was established in 1872 by a small group lead by Hugh Owen. Its campus is located on Penglais hill, a finely landscaped site enjoying spectacular views over the town of Aberystwyth and the sea. The university is, for the third year running, the best university in the UK for student satisfaction according to The Times Good University Guide 2010. It has over 7,000 registered students, including over 1,100 postgraduates across eighteen academic departments.

The Computer Science department at Aberystwyth is long established but continues to move with the times. There are currently 60 teaching, research and support staff and about 450 undergraduate students. Research in the department is motivated by the needs of industry, business and government; and it actively looks for opportunities for technology transfer. The department believes that collaboration in research is essential and collaborates with industry, with government, and with other academic institutions, on a national and international level.

The space and planetary robotics group has recently created a new Planetary Analogue Terrain laboratory (PATLab). Refurbishment is complete and has resulted in a 100 m2 facility (including 45 m2 of DLR Mars Soil Simulant-D based terrain) which supports advanced rover and manipulator motion tracking equipment, the latest operator/robot interaction and visualisation equipment, and a new “Concept E” rover chassis with a mounted manipulator, and associated sensors and instruments including a PanCam device.

As well as the PATLab, AU has built a new £10.4M Visualisation Centre on campus. Amongst the facilities the centre has to offer are: a domed 3-D reality theatre; immersive and interactive projection produced with Fakespace Powerwall displays, powered by Silicon Graphics Inc Prism Extreme high powered computing equipment for processing large data sets; Sun Microsystems high powered computing equipment, and workstations for a personal virtual reality experience; and fully managed facilities including offices, workshops, and workstations for individuals and groups of visualisation users.

The ProVisG team at Aberystwyth will mainly cover the robotics interface aspects of rover vision ground processing including robot calibration, and contribute to specific processing and visualization components such as shape from shading, real-time rendering, and Virtual Reality. AU is also involved with ProVisG field trials and the summer school. 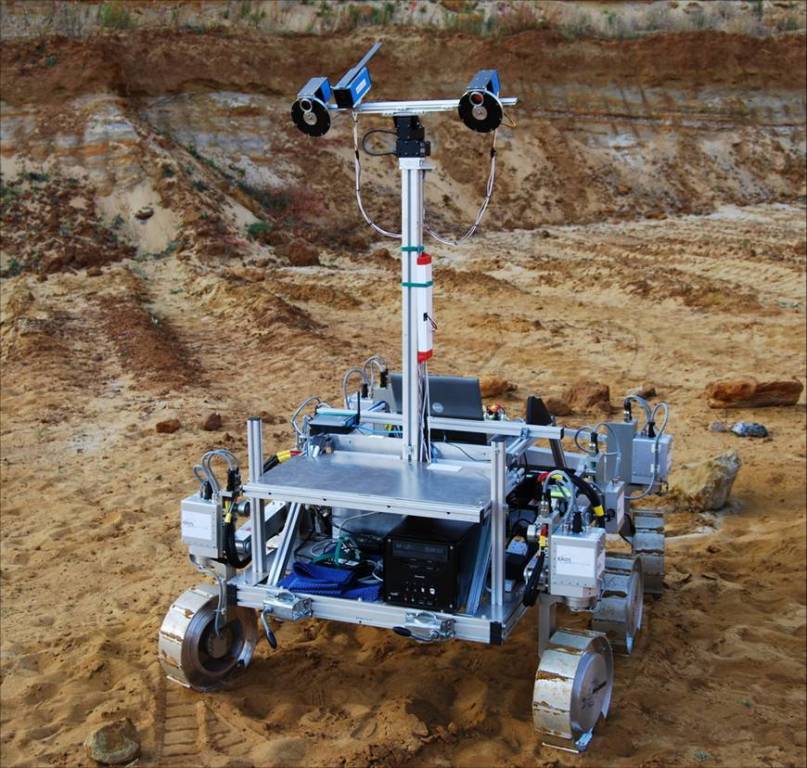 He is a member of the ESA ExoMars rover team. ExoMars is scheduled for launch in 2018. His responsibilities include PanCam modelling, simulation, image processing, and data visualisation; cameras calibration; and shape from shading methods for high fidelity DTM generation.

He was involved with a number of activities for the Beagle 2 Mars Lander mission, which was planned to arrive on December 25, 2003. He was responsible for the simulation and calibration of the robotic ARM, and developing ARM ground command software tools for mission planning purposes whilst the lander was on the Martian surface.

He is a member of the STFC UK Aurora Advisory Committee (AurAC). Aurora is the European Space Agency programme focused initially upon Mars robotic missions which may lead to human missions to Mars circa 2033.

Dr Tyler received his PhD in Artificial Intelligence from De Montfort University Leicester UK having previously obtained an Honours degree in Computing and Information Systems from the University of Manchester UK, and an MSc degree with distinction in Human-Computer Systems, also from De Montfort University. He has held the position of Senior Systems Administrator/Programmer for the UK Swift Science Data Centre. Swift is the joint NASA/UK/Italian space mission to study gamma-ray bursts using an autonomously targeting satellite observatory. Dr. Tyler is part of the AU ExoMars team and is working in the areas of PanCam image data processing and visualisation, and autonomous robot enabled science sample acquisition.

Dr Fallows graduated with his Ph.D in Solar Wind Studies from the University of Wales, Aberystwyth, in 2001 having obtained a Master of Physics (M.Phys) degree from the same university four years previously. He held the position of Post-doctoral research assistant in the Solar System Physics group, specialising in studying the solar wind through radio observations of astronomical radio sources, until April 2009. Since then he has held the dual positions of Scientific Officer in the Solar System Physics group and Research Associate in Space Robotics working on the PRoVisG project investigating autonomous calibration methods using stereo cameras.

Ralph Smithen is a Research Assistant in Space and Planetary Robotics. He received his BSc. degree in Physics with Space Science and Systems from the University of Kent in 1999. He has spent most of his professional life designing passive microwave devices for radar, telecommunications, and remote sensing. His current field of interest is software engineering in robotics applications.